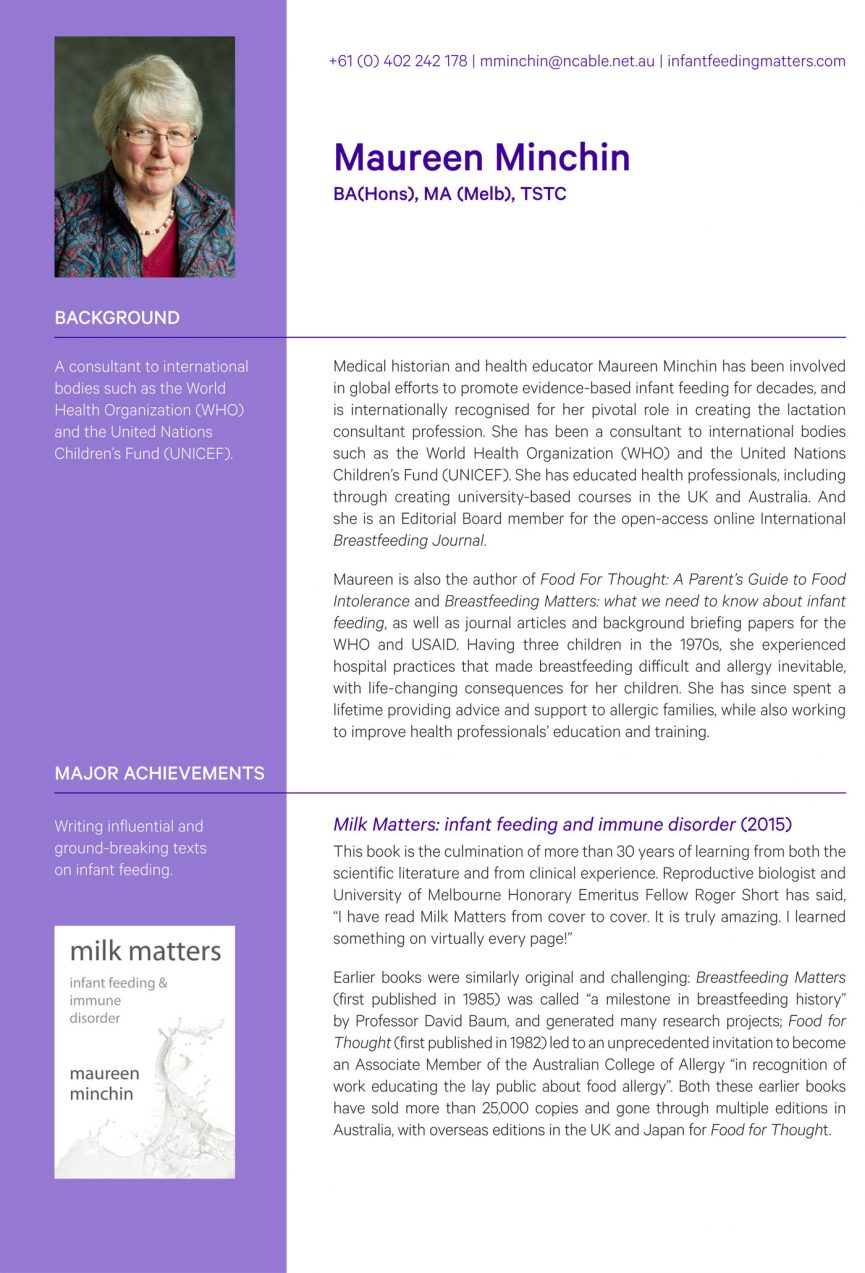 You’re entitled to know where I’m coming from in writing this book.

I am the mother of three, grandmother of five, a founding member of the International Lactation Consultant Association (ILCA) and an International Board Certified Lactation Consultant (IBCLC) for twenty-one years, an historian and educator. Over 40 years ago I had a colicky baby, and that changed my life forever. It set me on a path of discovering more about infant feeding. What I found made me so angry that ever since I have been trying to educate healthworkers and parents, and to make changes to the many social structure, attitudes, and ignorances,  which ensure that women fail to breastfeed their children.  I have no conflicts of interest, as I have used any money made in that process of education to enable me to reach even more parents and professionals with knowledge they should have had decades ago. I have never charged mothers for help, and do not accept funding from any group exploiting families for profit. Teaching, selling my books, and limited family resources have to date been sufficient to fund the work I do. (Though I could do a great deal more with independent funding enabling me to employ others to help!)

If you really want to know more about me, the book itself has an Appendix which will tell you. I wrote that Appendix because I believe that everyone who writes about infant feeding needs to declare where they are coming from, as well as where their income is derived: conflicts of interest can be emotional as well as financial.

I know personally jut how hard it is  for any parent to think that their best efforts were not good enough, that they may have harmed their child because they did not know enough, or try hard enough, or because their breasts did not make enough milk to feed their child, or they could not arrange their lives to make normal breast-feeding durations possible. My writing asks parents to confront harsh realities, and work to change them. I can do so convincingly only if I can demonstrate that I have done just that myself.

I am not in the business of making anyone feel worse about these realities, though I have been accused of doing so – ironically by women profiting from fostering attitudes and practices that cause breastfeeding to fail. No one should feel worse after reading the truths I expose. In fact it can be immensely liberating for women to realise that what happened to themselves as infants, or even to their mothers or grandmothers, may have made inevitable the problems they confronted, and others still do today.

So I am in the business of educating adults about the causes and consequences of both breastfeeding failure, and the substitution of industrial mixtures for what they need to realise is a priceless natural resource, a living tissue more complex than blood, women’s milk.

I am in the business of advocating serious structural societal changes so that future children have a greater chance of normal development and good health, and mothers a better chance of health and happiness.

I am in the business of protecting my grandchildren, and other people’s children, from that which I could not protect my children. (And in the last five years, three grandchildren have proved the value of the strategies I suggest!)

I stopped feeling guilty about my own children’s problems the day I realised what caused them, recognising that this was beyond my control. I want other women to stop feeling undeserved guilt (a useless emotion). I want parents instead to start feeling angry, as I do, that western medicine and science has been arrogant enough to assume that only trivial consequences would flow from discarding  the most fundamental human survival strategy, women’s milk. Science is now proving the necessity of breastfeeding for normal human development. Read the book and see why I think that. 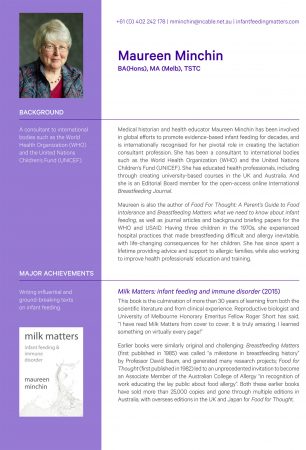 A consultant to international bodies such as the World Health Organization (WHO) and the United Nations Children’s Fund (UNICEF).

Medical historian and health educator Maureen Minchin has been involved in global efforts to promote evidence-based infant feeding for decades, and is internationally recognised for her pivotal role in creating the lactation consultant profession. She has been a consultant to international bodies such as the World Health Organization (WHO) and the United Nations Children’s Fund (UNICEF). She has educated health professionals, including through creating university-based courses in the UK and Australia. And she is an Editorial Board member for the open-access online International Breastfeeding Journal and Breastfeeding Review.

Maureen is also the author of influential books such as Food For Thought: A Parent’s Guide to Food Intolerance and Breastfeeding Matters: what we need to know about infant feeding, as well as journal articles and background briefing papers. Having three children in the 1970s, she experienced hospital practices that made breastfeeding difficult and allergy inevitable, with life-changing consequences for her children. She has since spent a lifetime providing advice and support to allergic families, while also working to improve health professionals’ education and training.

This book is the culmination of more than 30 years of learning from both the scientific literature and from clinical experience. Reproductive biologist and University of Melbourne Honorary Emeritus Fellow Roger Short has said, “I have read Milk Matters from cover to cover. It is truly amazing. I learned something on virtually every page!” Earlier books were similarly original and challenging: Breastfeeding Matters (first published in 1985) was called “a milestone in breastfeeding history” by Professor David Baum, and generated many research projects; Food for Thought (first published in 1982) led to an unprecedented invitation to become an Associate Member of the Australian College of Allergy “in recognition of work educating the lay public about food allergy”. Both these earlier books have sold more than 25,000 copies and gone through multiple editions in Australia, with overseas editions in the UK and Japan for Food for Thought. 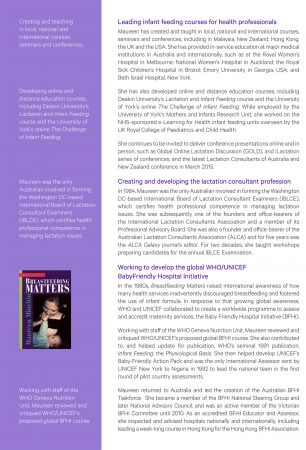 Creating and teaching in local, national and international courses, seminars and conferences.

Helping develop online and distance education courses, including the University of York’s online The Challenge of Infant Feeding, and Deakin University’s Lactation and Infant Feeding course.

She has also developed online and distance education courses, including Deakin University’s Lactation and Infant Feeding course and the University of York’s online The Challenge of Infant Feeding. While employed by the University of York’s Mothers and Infants Research Unit, she worked on the NHS-sponsored e-Learning for Health infant feeding units overseen by the UK Royal College of Paediatrics and Child Health. She continues to be invited to deliver conference presentations online and in person, such as Global Online Lactation Discussion (GOLD), and iLactation series of conferences, and the latest Lactation Consultants of Australia and New Zealand conference in March 2015 and Lactation Consultants of Great Britain in 2016.

Maureen was the only Australian involved in forming the Washington DC-based International Board of Lactation Consultant Examiners (IBLCE), which certifies health professional competence in managing lactation issues.

In 1984, Maureen was the only Australian involved in forming the Washington DC-based International Board of Lactation Consultant Examiners (IBLCE), which certifies health professional competence in managing lactation issues. She was subsequently one of the founders and office-bearers of the International Lactation Consultants Association and a member of its Professional Advisory Board; she initiated the WHO Code Committee and served as Chair for some years. She was also a founder and office-bearer of the Australian Lactation Consultants Association (ALCA) and for five years was the ALCA Galaxy journal’s editor. For two decades, she taught workshops preparing candidates for the annual IBLCE Examination.

In the 1980s, Breastfeeding Matters raised international awareness of how many health services inadvertently discouraged breastfeeding and fostered the use of infant formula. In response to that growing global awareness, WHO and UNICEF collaborated to create a worldwide programme to assess and accredit maternity services, the Baby Friendly Hospital Initiative (BFHI). Working with staff of the WHO Geneva Nutrition Unit, Maureen reviewed and critiqued WHO/UNICEF’s proposed global BFHI course. She also contributed to, and helped update for publication, WHO’s seminal 1991 publication, Infant Feeding: the Physiological Basis. She then helped develop UNICEF’s Baby-Friendly Action Pack and was the only International Assessor sent by UNICEF New York to Nigeria in 1992 to lead the national team in the first round of pilot country assessments.

Maureen returned to Australia and led the creation of the Australian BFHI Taskforce. She became a member of the BFHI National Steering Group and later National Advisory Council, and was an active member of the Victorian BFHI Committee until 2010. As an accredited BFHI Educator and Assessor, she inspected and advised hospitals nationally and internationally, including leading a week-long course in Hong Kong for the Hong Kong BFHI Association. 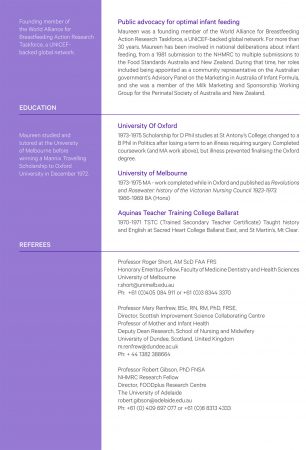 Maureen was a founding member of the World Alliance for Breastfeeding Action Research Taskforce, a UNICEF-backed global network. For more than 30 years, Maureen has been involved in national deliberations about infant feeding, from a 1981 submission to the NHMRC to multiple submissions to the Food Standards Australia and New Zealand. During that time, her roles included being appointed as a community representative on the Australian government’s Advisory Panel on the Marketing in Australia of Infant Formula, and she was a member of the Milk Marketing and Sponsorship Working Group for the Perinatal Society of Australia and New Zealand.

Maureen studied and tutored at the University of Melbourne before winning a Travelling Scholarship to Oxford University in December 1972.

Postgraduate studies at the University Of Oxford

1973-1975 Scholarship for D Phil studies at St Antony’s College; changed to a B Phil in Politics after losing a term to an illness requiring surgery. Completed coursework (and MA work above), but illness prevented finalising the Oxford degree.

1973-1975 MA – work completed while in Oxford and published as Revolutions and Rosewater: history of the Victorian Nursing Council 1923-1973.

Friends of the WHO Code?